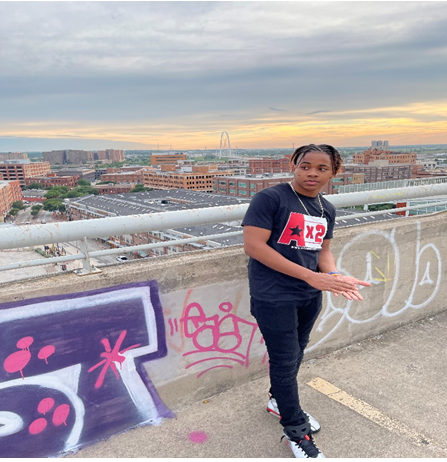 Aristotle, or Ax2, as some would call him, is a Texas Based Artist who works hard on his craft. He has one goal in mind: to become more serious and dedicated to his work and proving others wrong. “When I started trying to just be the best me, I became more relaxed in different situations. I used to stress myself but now I will just be myself and doing that I feel I produce better and I was able to gain more by just focusing on me trying to be the best version of myself.”Ax2 is an exciting and accomplished independent artist who refuses to give up even when things don’t go as planned. He wants to keep moving forward and use his music to do good things. Afterward, his goal is to make people want to see more of him, which he has done already in the studio. By putting in the hours of work, commitment, and inspiration both in front of and behind the scenes in the year 2022, he makes a difference in the music business.

Ax2 says he is always dropping music, and currently has got a hit single out right now, ‘She Gone Shake’ 9903 ft Traap4kashh.  Ax2 also has another hit he just dropped Friday, ‘Ready 4 it’ Ax2 ft Dejah & Mike. “I got a surprise coming up soon so if y’all want to tune in make sure y’all go follow me on my socials to stay tuned for the new news.”

Where are you from:

I’m from Dallas Texas, I am a military baby, so I have been to a couple different states.  I was Born in Texas, moved to Georgia for a couple years, then moved to Dallas and been here ever since.

Give three qualities for yourself:

Three qualities I would give myself is

What piece of advice do you want others to take back from the work you display?

A piece of advice I want others to take is, no matter what you wanna do with your life, don’t let anybody and I mean anybody say you can’t do something.  If you feel you can do something you go out and do it and do it as hard as you can because it will most definitely pay off.  They say all the time hard work beats talent so bust your tail and it’ll pay off.

As a business owner, what are some obstacles have you had to overcome to get where you are?

Some obstacles I’ve had to overcome, is expecting people to support, financials, and expecting quick growth.  When I first started, I had plenty friends and with that I thought that meant I was going to have support off the rip but was I wrong.  The same ones I thought was my friends were destroying my merch in front of me and behind my back and that’s when I stopped having friends cause that’s dead.  Financially, Everything cost.  But to be honest, it was a blessing and a curse.  But to do things you really want to do it cost money.  Promotions cost, covers cost, drip cost so that’s why I say it’s a blessing because that’s lowkey one of the reasons why I started my clothing brand, so I can rep my brand every day and still have some drip.

Lastly, growth.  Things take time and yes, some people blow instantly but everything that comes fast isn’t always a good thing.  I’ve been doing this a while, but I’ve learned many things that have helped me craft my craft well and bettered me so when my time does come I’ll be ready.  Can’t rush God’s timing because his time is always right.

Musically who were the most influential people in your life?

Even though he was before my time I would say 2Pac is influential to my life simply by how he carried himself through all the things he was put through, going through and finally, his writings. My momma gave me a book that’s filled with some of his poems and bro was deep and I really look up to him. Also Jay-z.  From what I’ve seen, dude is just dope.  Not only with the music but with his business and that’s something I inspire to do.  Having multiple streams of income and bro is doing his thing.  Also not only did he put himself on, but he brought and still bringing people up with him and that’s what I want to do.  If the Lord bless me to make it big, I want to bring people up with me.

Even though Ax2 is devoted to perfecting the art of his music to the highest level, his hardships have made him want to do even better in his business as well. “I have overcome my struggles to be where I am at right now, is by simply continuing to pursue full speed ahead even when times were hard and I felt like quitting.  As long as God keeps me breathing and I have strength in my body I can’t quit because God has not given up on me.  That is part of how I got my name Ax2, because you may not succeed the first time you may even fall, but if you fall you get up and you can have a second chance.  Praying to God to keep me strong, The desire to accomplish my dreams and goals, my family, and to prove to myself I can do whatever I put my mind to is what keeps me going and I won’t quit.  I am a Leo, so you know I got the heart of a lion.  King of the Jungle!”

Ax2 is now focused on continuing to be a producer and artist, so that he can build on his already strong foundation even more than it already is. If you want to be successful, you have to invest in yourself and the people who will help you out, and Ax2, knows this as he stays on his grind. Ax2 mentions within the interview that certain individuals in his life has inspired him to be great, starting from his own family. “My parents for sure have been very influential in my life.  My parents are the reasons to why I am the person I am today and I am so thankful.  My parents have stuck with me through my ups and my downs.  My parents are my life and reasons I want to be successful and to make them proud.”

As a result of the COVID-19 epidemic, a lot of big-crowd events, like concerts and festivals, were banned in 2021. This was because of restrictions put in place by both the city and the federal government. As a result, the number of chances for artists to show off their skills has been dramatically cut down. And Ax2, remains steadfast.

“Thank you so much, this has been fun and I had a blast! It’s ya boy Ax2 and you know what it is we outchea!”

Multimedia news brand, #Focuseddd,  highlights the skills and motivations of people who have a good reason for what they do, like Ax2.