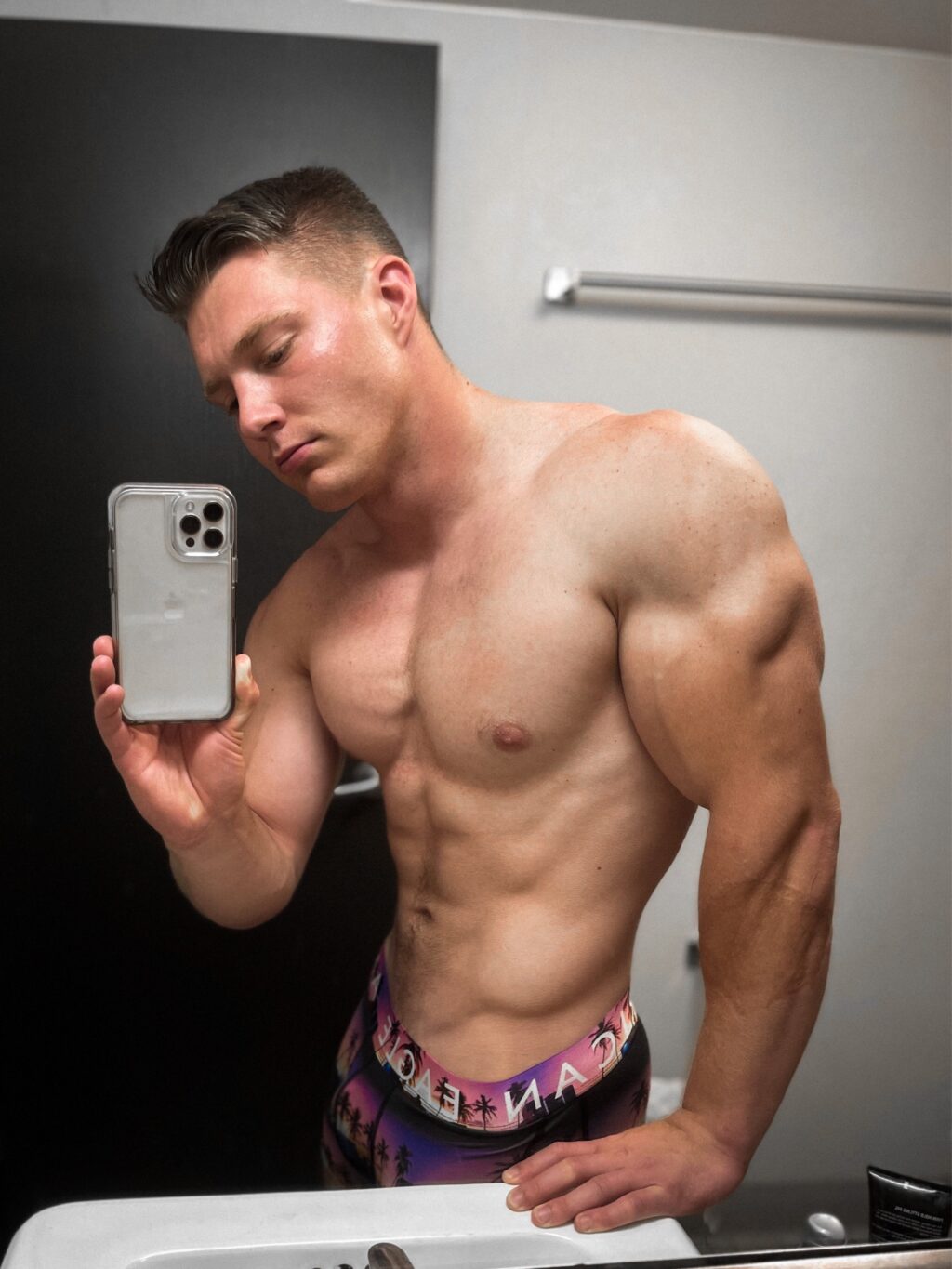 Tyler Valenzia was born October 14th, 1998. He grew up in a small community in Glen Burnie, Maryland. At the age of 2 years old, Tyler almost lost his life when he was attacked by two dangerous rottweilers. After going through multiple surgeries, doctors were able to save his right arm. He fully recovered and was left with a pretty big scar on his arm. At age 6, Tyler was introduced to soccer and wrestling. While growing up, Tyler was always very skinny and short compared to his peers.

By the time Tyler turned 14, he became interested in lifting weights and fitness. He was 122 pounds at 14 years old. Tyler recalls what started his initial interest in getting fit – when he was in 7th grade his friends were at lunch and they all started arm wrestling each other. Tyler remembers his best friend at the time beating him and it sparked a fire where he’d want to become bigger and stronger.

All of summer, Tyler found himself studying how to build muscle and he eventually would endlessly watch more YouTube videos of famous bodybuilders like Arnold Schwarzenegger.

Tyler would not just watch these videos for fun, but he was watching how these bodybuilders trained and ate. Not too long after, Tyler bought a door frame pull-up bar and a barbell. Eventually, he would use his dad’s old weights and use them every single day after school.

By the time 8th grade came around, Tyler’s friends couldn’t help but notice the physical transformation. He earned his redemption after beating every kid in arm wrestling who challenged Tyler. This inspired Tyler to keep training harder because for the first time in his life, he felt like he found something that he was really passionate about.

Tyler used this momentum to start trading and wrestling. By Freshman year, he was wrestling at 138 pounds and by Sophomore year he was 145 pounds. When Tyler turned 16, he got his first gym membership at his local Gold’s Gym because he’s always wanted to train there after seeing Arnold.

By Junior year, Tyler was wrestling at 160 pounds. Eventually, Tyler would push himself every single day to reach 180 pounds by his senior year.

Tyler ended up winning the County Finals by pinning his opponent in 14 seconds to take first in the tournament; then was immediately interviewed for two local newspapers. He recalls this moment in his life as one of his most memorable and greatest moments.

By the time day 2 of the tournament came around, Tyler was feeling confident for weigh-ins because on the first day he was about 4 pounds under and wasn’t stressed. Then when it came time to step on the scale, he was overweight by 5 ounces which disqualified him from the competition. Tyler recalls this moment in his life:

“I was destroyed, I felt like I had let everyone down including myself. It was a moment that not many people can say they’ve had the opportunity to experience. Going to states for wrestling was the highlight of my senior year. About 13 years of wrestling leading up to this. Just to get disqualified from my last competition. I can say that this was one of the worst feelings but I’ve learned to leave it in the past. Because we can’t change our past. We only have our future to look forward to.”

After graduating high school, Tyler wasn’t sure what he really wanted to do with his life.

After going through a couple of jobs, one of Tyler’s good friends from wrestling asked him to come to the Marine Corps Recruiting office.

“At first I really didn’t want to do it. I ended up bailing out. Then my friend graduated from boot camp and came home and told me all about it. Then he asked me to come back and try again. So I gave it another chance and after talking with the recruiter I thought about it and it seemed like the right choice to make. I shipped off to boot camp on February 12th, 2018.”

After wrapping up boot camp, Tyler earned his eagle, globe and anchor signifying that he has officially earned the title of United States Marine.

“This was one of the best feelings I have ever experienced up until this point in my life. I have always been that type of person to challenge myself and work hard towards something. The reward was always worth it in the end.”

Today, Tyler is currently 22 years old and still active duty in the marines. He is stationed in San Diego California and works as an RTCASS Technician.

Since then, Tyler has gained quite a large following on social platforms since he started.

“After my first deployment overseas I started making TikTok videos as well as content on Instagram. Both have been doing very well. If there is one thing that someone can take away from my life it would be this. I’m not trying to prove people wrong about me. I’m trying to prove that people were wrong about themselves. I’ve grown up with all these goals and visions in my head and every time someone would say it can’t be done. Or it will never happen. I want people to look at me as an example. I was never a very popular kid growing up especially in my early years in school. I was super skinny growing up. I came from a poor household with a single mother. Even after all this I can still make something positive out of my life because this is my life and you only live once. So if you have a dream or a goal and you want to pursue that, don’t let anyone stop you from getting there no matter what that goal is. It is your dream and that’s what matters.”

Tyler is teaching us that regardless of how we start, we all can make something positive out of our lives.